What are the Top 10 Scuba Diving Movies? 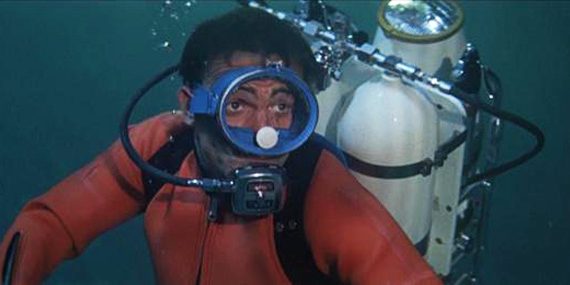 The question of what the top 10 scuba diving movies are is one that we have been debating loads recently in our after-dive gatherings.

The question of whether a movie inspired us to want to take up scuba diving in the first place, to the movie that best displays the underwater world, as well as those movies that include scuba diving and should be included is one that has divided opinion amongst the divers at Ocean Tribe.

So we have made it our mission to ask divers around the world what movie which includes scuba diving as a major plot part is the best and merits a place on the top 10 scuba diving movies?

From our discussions we have put together a list of the top 10 scuba diving movies below and included trailers for you to jog your memory or inspire you to watch them. If you have any movies that you think should be added to the list or replace ones currently on there then we would love to hear them.

One of the great underwater films especially bearing in mind it was filmed in the mid 1960s. The James Bond thriller features underwater hiding place, battles, spectacular marine life and of course Sean Connery’s Bond seducing and fighting his way to victory. A classic.

Finding sunken treasure, battling drug lords and living in paradise. All in a days work for Paul Walker’s diving instructor character. A film to encourage a new generation of scuba diviers and featuring stunning underwater photography captured in the Bahamas.

What more should we say. Another James Bond movie with scuba diving prison escapes and underwater battles. The fact that James Bond has to dive so much in his movies should say enough. Diving is cool. Although the escape from the bottom of the ocean to waterski behind the plane might not be great advice for divers!

Another Caribbean treasure hunt story, (despite being filmed on the Great Barrier Reef in Australia) Fools Gold features a treasure hunt, a love story, spectacular underwater scenes and light humour, making you really want to get into the water. Not sure about Donald Sutherland learning to dive in a jacuzzi though!

Shark movies often encourage people to misinterpret sharks and safety for diving with sharks. This movie however pulls no punches with that issue and is very clear on the message about sharks, whilst still giving a thrilling tale. Well worth it.

A third Bond film to grace the top 10 scuba diving movies, this unofficial (Non-Eon produced) Bond flick has possibly the greatest way to kill time on the way to a dive site ever. Of course it is Sean Connery who pulls it off with Barbara Carrera. Maybe after that the diving would be an anti climax. A similar plot to Thunderbolt updated to the 80s.

This Spielberg-directed classic might give off the wrong impression about sharks as vicious monsters. But sorry it is still a damn good film and the dive scene in it does still encourage curiosity in the underwater world.

Another sunken treasure and battling with drug-dealers underwater film, The Deep contains memorable underwater battles, another top performance from Robert Shaw as the wizened old veteran and of course the memorable underwater diving attire of Jacqueline Bisset. An earlier version of Into The Blue perhaps.

This film is not the best for encouraging people to scuba dive, quite the opposite perhaps, but does make us as dive professionals and operators consider a lot about diver safety and procedures. One to watch to remind us how careful we need to be.

Not a scuba-diving movie per-se but rather old school navy helmet diving, however Men of Honor is worth a watch for acknowledging the history of diving and pioneers such as Carl Brashear (portrayed in the movie by Cuba Gooding Jr) in breaking racial barriers and stereotypes. Awesome performances too from Bobby De Niro and Charlize Theron.
Category: Scuba divingBy MarkAugust 23, 2015Leave a comment
Tags: dive moviesLearn to divescuba diving
Share this post
Share on FacebookShare on Facebook TweetShare on Twitter Share on WhatsAppShare on WhatsApp Share on LinkedInShare on LinkedIn Pin itShare on Pinterest